Our first day was to be at Lindisfarne, now known as the Holy Island, on the unspoilt and rugged Northumberland coastline. Again the weather was gloriously sunny (a rare occurrence by all accounts!).

On route through the countryside we past Alnwick Castle, the home of the Percy family of Sir Harry Hotspur fame, and then travelled north up the road running parallel with the western coastline.

Soon we could see the imposing ramparts of Bamburgh Castle, built on the Whin Sill, a doleritic (lava) intrusion that forms the neighbouring Farne Islands and also carries sections of the great Roman wall. Suddenly the site of the seat of Saxon power and the backdrop to all the amazing events we had been musing on was in full view. 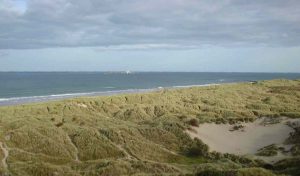 The Farne Islands, many of which are partly submerged, are now a major bird sanctuary, and it was at the windswept Inner Farne where lived the revered Saint Cuthbert in a cave hewn out of the lava rock.

It was in 648 at the age of 14 that Wilfrid’s association with Lindisfarne began when Queen Eanfled sponsored him to become an attendant to another nobleman who was to become a monk on the island. The monastery was rapidly becoming the focus of Christianity in Anglo Saxon England and achieved international fame as a centre of learning and culture.

But back to our journey as we arrive at the coast and prepare to cross the Refuge Causeway over to the island to see Lindisfarne for ourselves.

The views of Lindisfarne as we made our approach over the Refuge Causeway were quite spectacular, fully living up the windswept dramatic images that I recalled from modern prints of the Island. The road was partly flooded at high tide and therefore the timing of the crossing and knowledge of the tides were essential if we were to have a safe crossing over (and departure!). To our right was the Ancient Pilgrims Path, marked out with poles to guide those unfamiliar with the perils of quick sands and other dangers of the sea. Occasionally we spotted platforms rising out of the sands with ladders up to them and our driver Brian recounted how these could provide a safe haven for those trapped on the sands with a fast rising tide and powerful currents suddenly engulfing them. We all mused on what would happen if the coach party was in that condition and the platform wasn’t large enough for the whole party!
It became clear that the mental picture I had of the island, a wild windswept shoreline rising to a castle on a rock, was not an area most of us would be visiting other than to gaze at in the distance.

The present stone Lindisfarne castle, still looking very impressive, was constructed between 1565 and 1571 to protect the harbour and converted into a private house in 1902.

Our visit was to centre on the 13th century present day church of St Peter and the adjoining ruins of the priory church that was constructed in 1150. It became apparent that none of the buildings we would be seeing were around when Wilfrid entered the monastery at the age of 14 in 648. The Vikings destroyed the church at Lindisfarne in 793 and at the Reformation in 1537 Henry VIII’s commissioners closed the 12th century priory that lead to a gradual decay, which was not arrested until the 19th century.

The next shock to the system was that the venerated saints here did not really include Wilfrid (not a mention as I recall of our Saint in the local museum) but the great Celtic Saints Aidan and Cutherbert. The monastery on Lindisfarne was founded in 635, thirteen years before Wilfrid arrived on the scene, when Aidan, an Irish monk, was summoned by King Oswold of Northumbria to be the first missionary bishop of Bernicia. The monastery that Aidan built, and it’s austere and severe island setting, emulated that in Iona, Scotland that he had left. The Irish Saint Columba founded Iona in 563 and Aidan perpetuated the Celtic traditions of Irish monasticism at Lindisfarne. We were told that Aidan’s buildings were probably very simple wooden affairs, consisting of individual cells housing one or two monks – perhaps a master and a novice – grouped around a church. ‘Frugal and austere’ was how the historian Bede described Aidan’s regime.

In 651, during Wilfrid’s stay at Lindisfarne, Aidan died and Finnan, his successor as bishop, built a church in the Irish tradition of hewn oak covered with reed thatch. Wilfrid left Lindisfarne for Kent two years later and then, accompanied by Benedict Biscop went on to Lyon and then to Rome whence he returned as the great protagonist of all things Roman and a vision of Roman unity rather than the Celtic rule of Columba that was to cause much dissention and upheaval in these parts. We shall see later in our story that in 664 at the Synod of Whitby King Oswiu called for a settling of whether the church was to follow the Roman or Celtic traditions – in particular the settling of the date of Easter and also the form of the tonsure (monk’s haircut) and it was Wilfrid, who argued for the Roman unity, who won the day. This was to be a vital turning point in the history of the church in England. Colman, who was Abbot-Bishop at the time, resigned his see in protest at Whitby and returned to Iona with the bones of Aidan and accompanied by many of his Celtic monks. The difficult task of upholding the Roman way at Lindisfarne despite themselves being brought up in the Celtic tradition was handed to Eata as bishop and Cuthbert as Abbot who were transferred to Lindisfarne from Melrose.

Cuthbert was the same age as Wilfrid being born in 634/5 and was by all accounts a quite remarkable man. Originally a shepherd, he entered the monastic life in Melrose where he displayed a great aptitude for the four occupations – study, prayer, vigil and manual labour and also for missionary work, which in the Celtic tradition was the principal occupation of the monks at that period. In Montalembert’s “Monks of the West” he recalls how Cuthbert prepared himself for preaching and the administration of the Sacraments by extraordinary penances and austerities in including passing the whole night in prayer in a stone- bathing house immersed in freezing water. Cuthbert’s preparation was to help him during the difficult times ahead at Lindisfarne where, after the leaving of Colman, many of the monks who remained continued to object strongly to the Roman way. Cuthbert never gave up reasoning with them where “he bore their reproaches as long as that was possible, and when his endurance was at an end, raised the sitting without countenance and tone, and resumed next morning the course of the debate, without ever permitting himself to be moved to anger, or allowing anything to disturb the inestimable gift of kindness and light heartedness which he had received from God”. If only PCC meetings could be held in such a vein!

Cuthbert remained at Lindisfarne for twelve years where he maintained the reforms decreed at Whitby, instituted severe rule and extended his apostolate down south as far as Durham. However, in 676 he resolved to leave the monastic life and become a hermit on the Inner Farne Island, which was clearly visible both from Lindisfarne and neighbouring Bamburgh castle. Inner Farne was a sterile and deserted island, which was supposedly haunted by demons. Cuthbert took possession of it “as a soldier of Christ, victorious over the tyranny of evil, and built there a palace worthy of himself, hollowing out of the living rock a cell from which he could see nothing but the sky, that he might not be disturbed in his contemplations”. His successful efforts to protect birds (hence St Cuthbert’s [eider] duck) made him one of the earliest wildlife conservationists. Cuthbert’s fame for holiness quickly grew and many visited the island as rumour spread that on a desert rock their lived a solitary who was the friend of God and skilled in healing of human suffering.

We shall see later in our story that during these tumultuous times our Saint Wilfrid had fallen out of favour with King Oswiu’s successor King Ecgfrith. In 684 the Northumberland King sailed over to the Inner Farne and implored Cuthbert to return as Bishop of Hexham a see that in 685 Cuthbert exchanged with Eata to become Bishop of Lindisfarne. Just two years later, sensing the end was near, Cuthbert again retired from Lindisfarne to his beloved Inner Farne Island to die. He was buried at Lindisfarne but in 875 the monks interred the body to protect it from Viking raids and it was found to be incorrupt. After many moves around north eastern England the body was finally deposited in Durham Cathedral – the subject of another day in our Pilgrimage.

So here we were at Holy Island, the centre of Celtic Christian development in Northern England with references everywhere to the venerated saints Aidan and Cuthbert looking for any snatches of references to the focus of our pilgrimage – Wilfrid!

We were not however disappointed for after a moving Eucharist in the 13th Century Church of St Peter, the Curate Kate Tristram gave us a most informative account of what life was like in 648 when Wilfrid entered the Lindisfarne monastery at the age of 14. Queen Eanfled, the wife of King Oswiu, sponsored Wilfrid and he accompanied a nobleman who was entering the monastic life. The monks took Wilfrid under their wing – teaching him Latin and setting him the task of learning very quickly by heart the Psalms and the four Gospels. It is difficult for us now to comprehend the value of the education that was given to Wilfrid – in an age where most people were illiterate the ability to read and write and recount the Scriptures without books must have been an incredible gift.

Nothing is left now in the way of artifacts from Wilfrid’s period bar a large stone that rests between the 13th century church and the 12th century priory. However Kate showed us the spot in the church where Aidan’s wooden church of the monastery would have been sited.

By all accounts Wilfrid was a very willing and bright pupil. After 5 years in the austere Celtic way of life, with the help of Queen Eanfled, herself a staunch supporter of the Roman way following her upbringing in Kent, Wilfrid embarked on a journey first to Kent and then to Lyon and finally Rome. On his return from Rome he stayed another 3 years in Lyon before returning to Northumbria in 658. By now Wilfrid was fully committed to the Roman way of things and was set to turn his back on the Celtic traditions that he had grew up with during his five-year stay at Lindisfarne. Christianity in England was never going to be the same again – but that is another part of our story.

All images and articles copyright of St. Wilfrid’s Church unless stated otherwise and not to be reproduced without permission.